I was a bit skeptical when I signed up for this race 3 months ago but I needed to prove to myself that I could race this distance.  The last time I raced a 70.3 was at Eagleman in 2012 (which did not go as planned) and I’ve been itching for redemption ever since.  I also wasn’t sure if 12 weeks was enough time to get in the shape I wanted to be in, especially coming off an injury.  As the weeks progressed, things were looking really good.  I wasn’t broken down nor had any lingering aches or pains.  With 5 or so weeks until the race, we decided to go all in and see what happens on race day.

Friday came and I got in a short run in the morning around my neighborhood before packing up and heading west to Naples.  Once getting into Naples, I saw Pittsburghers Chad Holderbaum (pro triathlete) and Bruce Jenkins out on their bikes riding the course.  I was pretty excited to be racing Chad as I wanted to use this race as a measuring stick going forward.  I got in a quick 30 minute ride on the course to make sure everything was good to go on the Trek Speed Concept (Thanks Tri Bike Run!).  Mandy and I then headed to the hotel to get situated and found some excellent Italian food for dinner so I could have my usual chicken parmigiana.  If you are ever in Naples, be sure to check out Sophia’s Ristorante Italiano…. by far some of the best Italian food I’ve ever had.

If you ask me, these longer races really start as soon as you wake up in the morning (possibly even the day before).  Proper nutrition and hydration is absolutely critical for a successful day.  On race morning I ate two packets of Quaker Instant Oatmeal – Maple & Brown Sugar and a banana.  I also got in a bottle of First Endurance EFS with a scoop of pre race and later had a couple sips of a FE liquid shot just before heading to the swim start.  After a quick warm up in the Gulf of Mexico (that water was much colder than I expected it to be…. apparently the west coast of Florida is much colder than the east coast), I was ready to go.

SWIM – 1.2 miles (23:19 *PR, 1st Overall)
It was an out of water start and everyone was inching forward trying to get to the front.  The gun went off rather quickly and I got a decent jump with a few others just ahead or right next to me.  I had 2 or 3 guys with me for those first 30 seconds, which gave me a glimpse of hope that I would have some people to swim with.  Unfortunately that glimpse was short lived as they faded quickly.  I got to the first turn buoy with a pretty sizable lead where I was met with a little bit of current coming towards me.  I put my head down, kept my heart rate in check, and hit the cruise control button.  Overall I had a great swim and I was feeling good heading into shore. 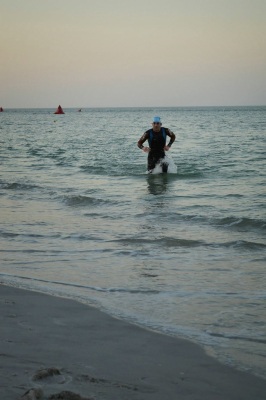 BIKE – 56 miles (2:08:11 *PR, 1st Overall)
I headed out on the bike and figured I would have a 2-3 minute lead.  Eric warned me the day before not to over exert myself the first 30 minutes on the bike as this could kill the rest of my day.  I was very cognizant of my power numbers and made sure I was getting in my nutrition.  My nutrition plan included: 1 bottle with 2 scoops of EFS lemon lime and 1 scoop of pre-race (200 calories) and another bottle with 2 servings of First Endurance liquid shot kona mocha flavor mixed with water (800 calories) and take water at every aid station to wash it all down.  I learned in training that I need a lot of water as I’ve often finished training rides extremely thirsty.  So I forced myself to hydrate early on the bike no matter if I was thirsty or not.  This played out very well as everything was going down smoothly and I never felt my energy level drop.  I knew Chad would be hunting me down on the bike but I wasn’t sure where my biking was compared to his.  I knew if I biked well, I could possibly ride into T2 just in front of him.  The bike course wasn’t closed to traffic and we were riding on some busy roads, but I was lucky enough to have 2 motorcyclists leading me out on the roads for the entire ride.  At the turn around, I grabbed a bottle of water but I wasn’t paying attention to the turn around point so I overshot the turn around and missed the timing mats for the 28 mile split (hopefully no one was too worried when that split didn’t come in for me).  I took note of my computer time and started to watch for Chad going the other way.  We didn’t cross paths until 3-3.5 minutes later which seemed odd (I later found out Chad went off course and added 6 minutes to the course).  I put my head down for the last 28 miles and focused on my race.  I was banking on an aid station at mile 45 to grab another water but it never came.  This made me a bit worried but I still had my liquid shot bottle to finish off.  I rode into T2 feeling great and ready to tackle the 13.1 mile run.

RUN – 13.1 miles (1:31:37 *PR, 3rd Overall)
The plan was to run around 7 minute mile pace.  My legs felt great and my heart rate was in check.  I glanced at my watch after a few min and it said 6:20 min/mile.  Whoops!!  Slow your role Steve.  Nutrition wise, I carried a FE liquid shot flask (400 calories) and planned to take water and/or cola at the aid stations.  My stomach was feeling relatively good (does it ever really feel great?) and I was clicking the miles off just under 7 minute mile pace.  After the turn around, my pace began to slow.  The legs just wouldn’t go any faster.  I thought there was still a chance of Chad catching me if he was on his game.  I started doing the math and figured if he was running 6-6:15 minute miles, he may get me in the last mile.  I tried to keep those thoughts out of my head and kept putting one foot in front of the other.  “Just get to the next aid station” I told myself.  What also wasn’t helping was the fact that it was brutally hot and sunny out there for January and there wasn’t much shade on the course.  The last mile finally came and I got a big burst of energy so I picked up the pace.  I was pretty excited to finally see that finish line and crossed it first in just my 2nd attempt at this distance. 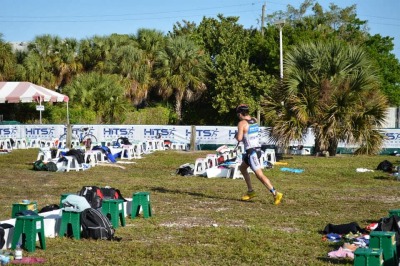 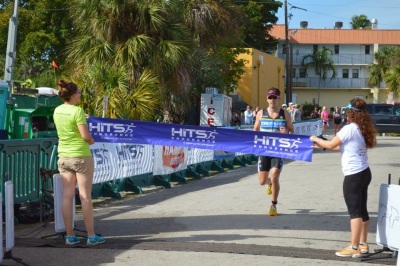 Looking back, it would have been nice to have Chad with me on the bike or run.  I really could have used the extra push on the run as I just ran comfortably not wanting to completely deplete myself.  Overall, I couldn’t be happier with the result and I was really surprised with the overall time. I knew the course was fast but not THAT fast (I did have the bike and run courses a bit short according to my Garmin).  It’s nothing new but running is still my achilles heel.  I’m going to need to put in some run focused training in order to keep anyone from running me down.  With a little more training and speed work, I think I can find 4-5 minutes on the run.

I was fortunate to have my Aunt Beatrice in town, so she came by the race to cheer me on.  It was really great to share the experience with her and Mandy.  Thanks again to everyone for the support, especially my sponsors: Tri Bike Run, First Endurance, and Blue Seventy.